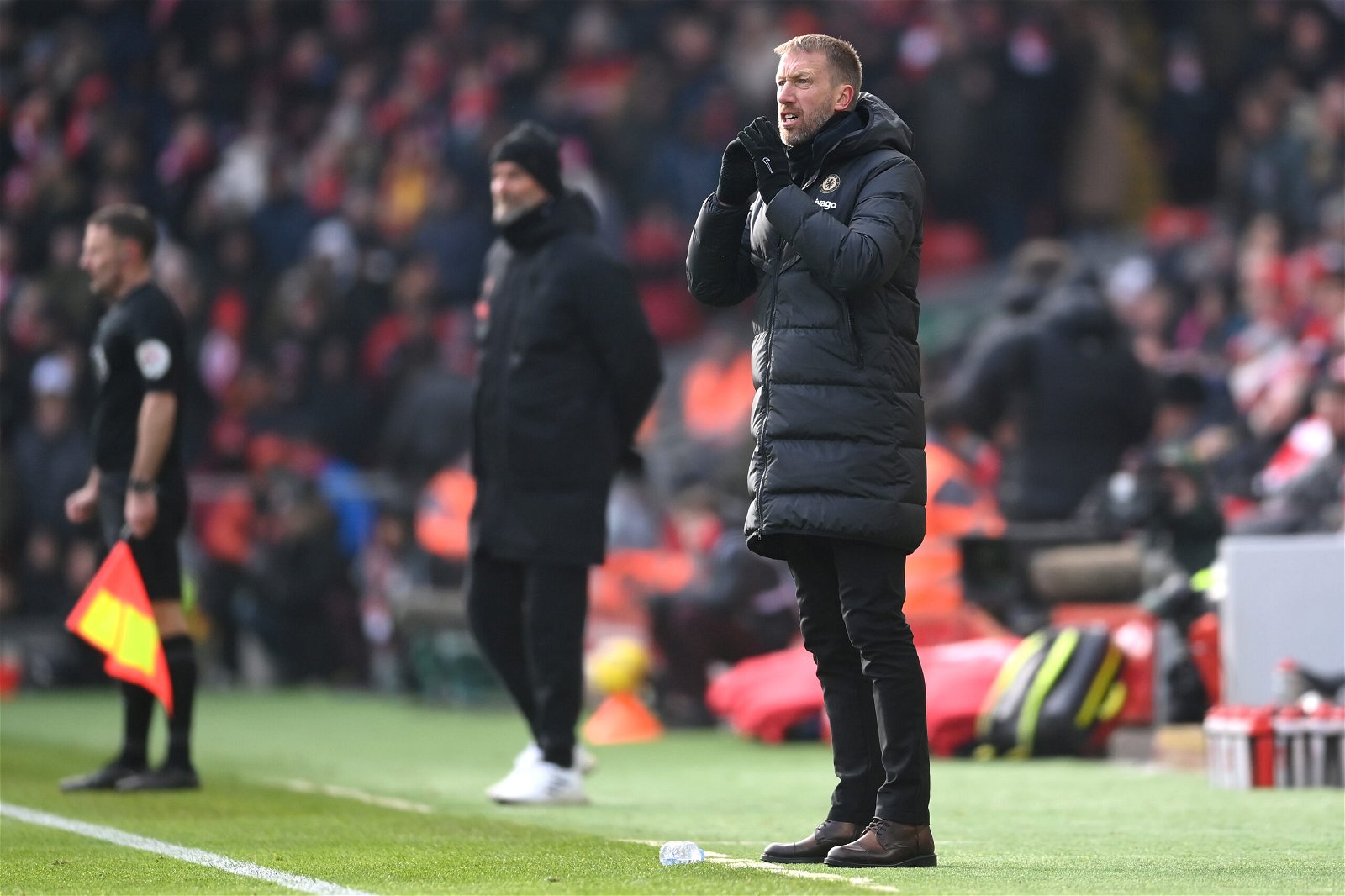 Chelsea and Liverpool were both unable to boost their chances of a top four finish after competing in a feisty 0-0 draw that was low on quality throughout, despite Kai Havertz’s disallowed effort.

Chelsea started the game quickly, and thought they had taken an early lead through Kai Havertz, only for VAR to disallow it for a marginal offside call. Havertz was slightly ahead of the ball when Thiago Silva cannoned his effort off the post and back to the German; an unlucky but correct decision to disallow the goal.

A few minutes later Cody Gakpo blasted over Liverpool’s first chance of the game to cap off a lively opening at Anfield.

Chelsea began to take control of proceedings and looked the more likely side to break the deadlock, especially from set pieces. Lewis Hall and Conor Gallagher had efforts which threatened, before Benoit Badiashille went closest, forcing Allison into a strong reflex stop from his close range header.

Liverpool still had time to show the threat they posses on the counter attack, with Mohammed Salah curling an effort over Kepa Arrizabalaga’s bar to finish off a first half which lacked quality.

Liverpool came flying out the gates in the second period, and nearly took an immediate lead with Ibrahima Konate’s clearance-cum -shot nearly catching Kepa out before Naby Keita and Gakpo went close too.

Chelsea brought on Mykhailo Mudryk soon after to try and regain their foothold in the match, with the change clearly having a buoyant effect on his team-mates. Hakim Ziyech went close, blazing over from inside the box after doing well to work an opening for himself. Mudryk then showed off his twinkle toes, skipping through a few chances in a packed box before sending his shot wide from a narrow angle.

Liverpool came back again and missed some good opportunities of their own, with Gakpo forcing a solid save from Kepa before Trent Alexander Arnold volleyed over.

Liverpool pushed hard for a winner late on, but Chelsea remained resolute thanks to the experience of Thiago Silva and co, to draw a third straight league match against Liverpool

A draw does not do a lot to help either side’s chances of a European finish this season, but that is the result that played out at Anfield on Saturday afternoon. Both teams would have liked a win to kickstart their faltering seasons, yet neither showed the necessary skill to threaten any of the Premier League’s top four who may have been watching on.

With a week off between matches, Graham Potter and his staff will have plenty of time to plot Chelsea’s ascent up the table, but they will have to start seriously building their points tally sooner rather than later if they have any chance of resurrecting this season, which is now over the halfway stage.

Chelsea are a team low on confidence presently, and this is showing itself most prominently in their attacking play. Thiago Silva should have scored the initial chance which led to Havertz disallowed strike, which set the tone for Chelsea’s lack of clinical edge in the final third. Mason Mount had chances to shoot where he decided to pass instead, showing his lack of confidence, whilst Badiashile, Ziyech and Mudryk all missed good opportunities.

Carney Chukwuemeka’s decision to not shoot when put through on goal in added time, summarised Chelsea’s blunt attack. If Chelsea are to move up the table in the coming weeks, they will have to markedly improve their efficiency in front of goal.

3) A bright debut from Mykhailo Mudryk

Mykhailo Mudryk was brought on early into the second half to inject some energy into Chelsea’s attack, and he certainly delivered. Mudryk showed some moments of real quality, including some fantastic close footwork to create a chance for himself in a packed Liverpool box.

Mudryk then showed his lighting pace to skin James Milner who had no choice but to take down his man and receive a booking before he was promptly brought off. Mudryk nearly got on the end of a few Ziyech crosses, however he was unable to convert his chances. Considering Mudryk is still suffering from ring rust brought on by Ukraine’s mid-season break, it was an exciting debut from the Blues’ new signing.

A Liverpool team which was missing Alexander Arnold, Diaz, Nunez, Jota, Van Dijk and Fabinho was arguably their for the taking from a Chelsea perspective. Despite Chelsea’s own injury problems, there are few better opportunities to take away three points from Anfield, and yet Chelsea did not take it. There was a lack of quality from both sides to take advantage of their weaker opponents, and with Chelsea being so profligate in the first half, Graham Potter may see this result as two points dropped rather than one gained.

Making his first start in his favoured central midfield position for Chelsea, Lewis Hall struggled to make the impact he would have hoped for at Anfield. Making way for Mudryk early in the second half, Hall was the first player to be changed by Potter after an indifferent performance. Hall gave the ball away for an early Gakpo chance and struggled at points to deal with Liverpool’s pressing midfield.

However, Hall would have learnt a lot from his minutes at Anfield, playing in such a big occasion will stand him in good stead as he progresses at Chelsea, with more minutes likely on the horizon for the youngster who has seemingly gained his managers trust.