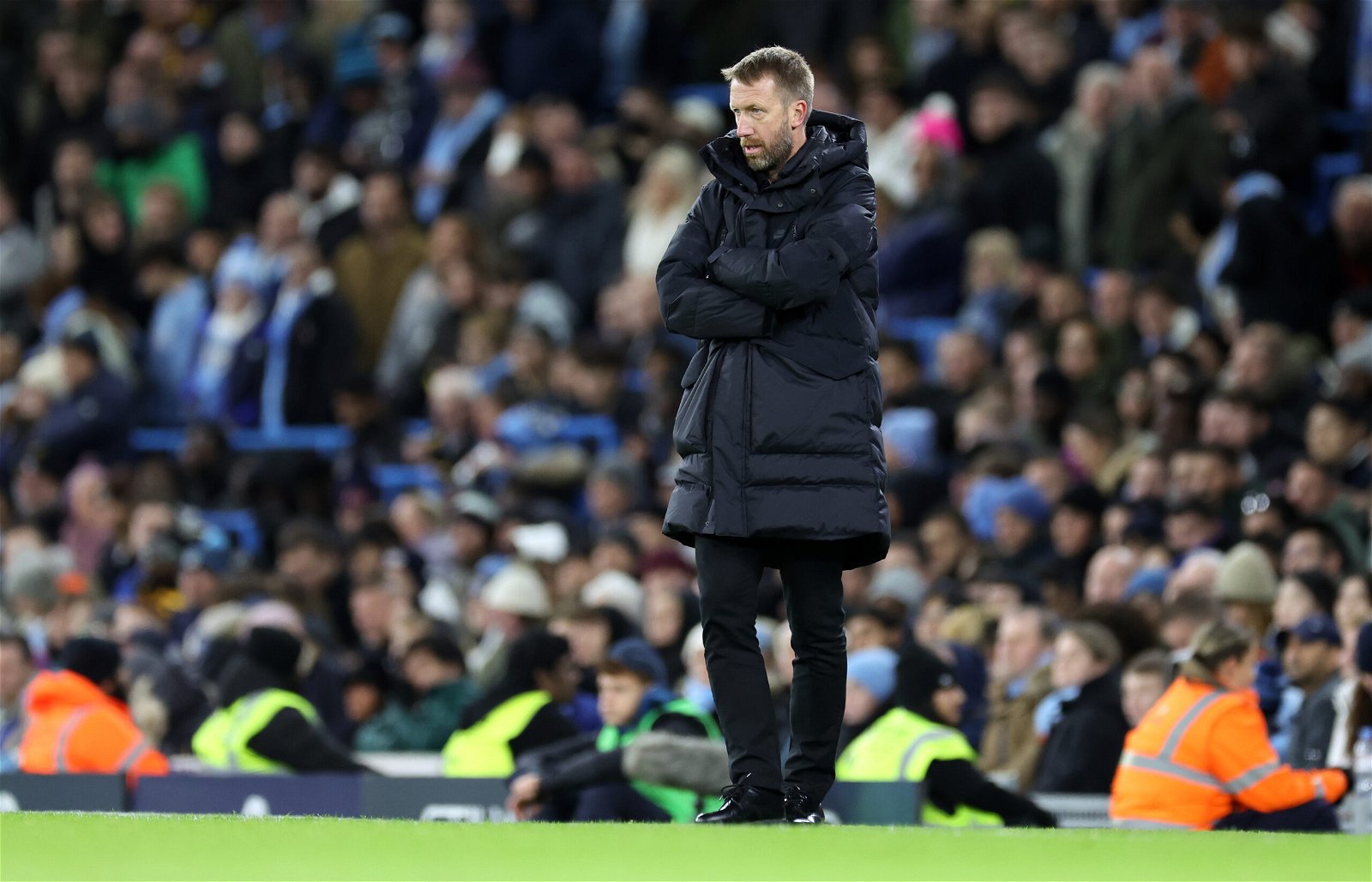 Graham Potter’s Chelsea were embarassed by Manchester City at the Etihad as they came crashing out of the FA Cup after reaching the final in the previous three campaigns.

Riyad Mahrez opened the scoring with a fine free-kick as the Blues were under pressure from the first minute.

Kai Havertz’s punch in the box saw the German penalised for handball and Julian Alvarez converted from the spot before Phil Foden made it three.

The England international was involved again as City were handed a penalty, with Foden brought down by Kalidou Koulibaly in the 84th minute, which Mahrez converted from.

The Blues faithful were in fine voice despite the poor performance on the pitch, who chanted the name of the late Chelsea legend Gianluca Vialli throughout the 90 minutes in memory of the Italian icon.

One win in nine games now for Graham Potter‘s side, and just what is next for the Englishman and his team?

Kai Havertz was trusted to lead the line once again, and while he had no support in attack, the German did not help himself before being replaced at half-time.

On the occasion where the ball was delivered into his feet, Havertz was unable to hold it up and Chelsea more often than not lost the ball and were put under pressure once again.

It’s times like now when the Blues miss the calming prescience of Olivier Giroud in attack, a man who would take attention away from his fellow forwards and allow them to play-off him with freedom.

Punching the ball away from a Man City corner saw Havertz gift City a second and end the match as a competition, but things like this can happen to any player – what needs to be sorted is his role in Potter’s plans.

It’s time for Potter and Havertz to get their head down and work hard in individual training to find a solution to Havertz’s role at Chelsea. It’s make or break for the forward now.

If there is no solution, Bayern Munich may just come sniffing in the summer for Germany’s star man.

Cast your minds back to February 2019, nearly four years ago to this day.

Maurizio Sarri rocked up to the Etihad and saw his side thrashed by Guardiola’s team… 6-0.

Following the result, pressure mounted on Sarri and things got worse that season, with Bournemouth embarassing the Blues just days later with a 4-0 win.

Chelsea ended the season with a Europa League title as the board persisted with Sarri at the helm, and as it stands it looks like the same will be of Potter this campaign with all signs pointing towards the long-term future under the Englishman.

However, four years on and Man City have dominated English football, and could have won it all if it wasn’t for Chelsea winning the 2021 Champions League.

And while that night will go down in history, would Chelsea swap that win for what City have now?

Who knows. But one thing is for sure – the Blues have made no progress from that 6-0 defeat despite an overhaul in the squad, three new managers and new ownership. Things must change. They must learn from this defeat and be all in for the long-term project.

3) Graham Potter must take some responsibility despite injuries

Potter has been under pressure of late, having now won just one of his last 10 matches at Chelsea.

That is simply not good enough, even with the applied context. Chelsea are without 10 players, who could all arguably be starters but are out injured.

Under different owners, Potter may have been handed his P45 in the tunnel at the Etihad today but it is clear that Boehly and Co have faith in the Englishman to build a side for the future.

However, he must stand up and take responsibility for the recent run of form. Former boss Tuchel suffered similar injuries and was dealing with this same squad last season.

The difference? Tuchel made it to two domestic cup finals, falling to defeat on penalties.

The German’s system may not have been the most attractive at times but one thing it did do was protect the players and their weaknesses at Stamford Bridge.

Potter must learn from his mistakes, take responsibility and deflect the pressure from his players, who are no doubt under performing. There’s no time for excuses today.

4) Trust the future, not the present

It’s pretty clear now that Chelsea have next to no chance of winning a trophy this season, a disaster for this club.

What’s the solution to this then? Go all out for the top four? Yes and no.

Potter has said that he plans his weeks for the next game, but now is time to scrap this mentality and plan for the long-term.

It’s clear that if Chelsea were planning for short-term success, Potter would not be in the dugout. That’s the harsh reality of it.

Zinedine Zidane would have had money thrown at him, Luis Enrique would be getting a phone call, maybe even Didier Deschamps would be reunited with his former side in the dugout.

But no, Potter is Chelsea’s manager. The same person who took a while to get his Brighton side playing the way he wanted to, with the right recruitment and set-up behind the scenes.

Therefore, Potter shouldn’t be planning to win just the next game, he has to find something to build on. Give the players that will be here next season the chance to build chemistry in a system that can be implemented for years to come.

Chelsea fans no longer want to see players that will be gone in the summer on the pitch, strolling around and getting their paycheck.

The fans want a young, energetic core who know that they will be wasting their careers if they don’t perform for Chelsea.

David Datro Fofana, Benoit Badiashile, Carney Chukwuemeka and Omari Hutchinson all made huge decisions to join Chelsea and now should be given the game time to nurture into first teamers for the future. Even Denis Zakaria has shown more desire to fight for a place in Chelsea’s future than some of these players. Let them prove themselves.

Potter has done this the last few games, handing Bashir Humphries, Carney Chukwuemeka, Omari Hutchinson, Lewis Hall et al. minutes. It’s a good start but the reintroduction of Cesar Azpilicueta in the second-half was a step backwards. He has not been good enough this season and proved it by breaking down a great move, passing the ball out for a goal kick.

Mikel Arteta did this with Arsenal, and while the short-term results took a hit, the game time afforded to the likes of Gabriel Martinelli and Bukayo Saka has seen them top of the league this season.

Potter, now is the time. Put your foot down, give the youngsters regular game time and plan for the future. Trophies are gone and the fans would rather see young talent trying for the team than players playing for their next move.

5) Chelsea need a creator in the team

Chelsea haven’t had a real creator since Eden Hazard, who, let’s be honest, had to create for himself and score the goals.

While the Blues focused more on becoming a team since Hazard’s departure, Tuchel was never given a true creator for his squad, the likes of a Martin Odegaard, Kevin De Bruyne etc. and Potter has inherited a squad without a spark in midfield.

Mason Mount has been used in what is deemed his preferred position now for weeks but the Englishman has not done enough.

Then there’s Conor Gallagher, who has had a dreadful season thus far. The midfielder at least tries, but he is not the solution for this Chelsea team. He cannot create, but he could prove to be a key cog in the squad in the future as an energetic substitute. For now though, there’s work to be done in this atrocious midfield.

The Blues simply have to add a creator this window, somebody like the young Zakharyan from Dinamo Moscow, who can provide competition to Mount and let him know that he is not a guaranteed starter. Dani Olmo has also been linked, it’s time to put your money where your mouth is and get somebody who can provide for the forwards.

Erling Haaland, who was on the bench for City, must be so grateful for Borussia Dortmund’s stane of not selling him to Chelsea now – he’d probably be sitting on a total of five goals and branded a flop if he was thrown into this team without anybody to provide for him.

Oh, and while we’re at it – pay the release clause of Enzo Fernandez. That’s the start to transforming this midfield, and he can create for the meantime.