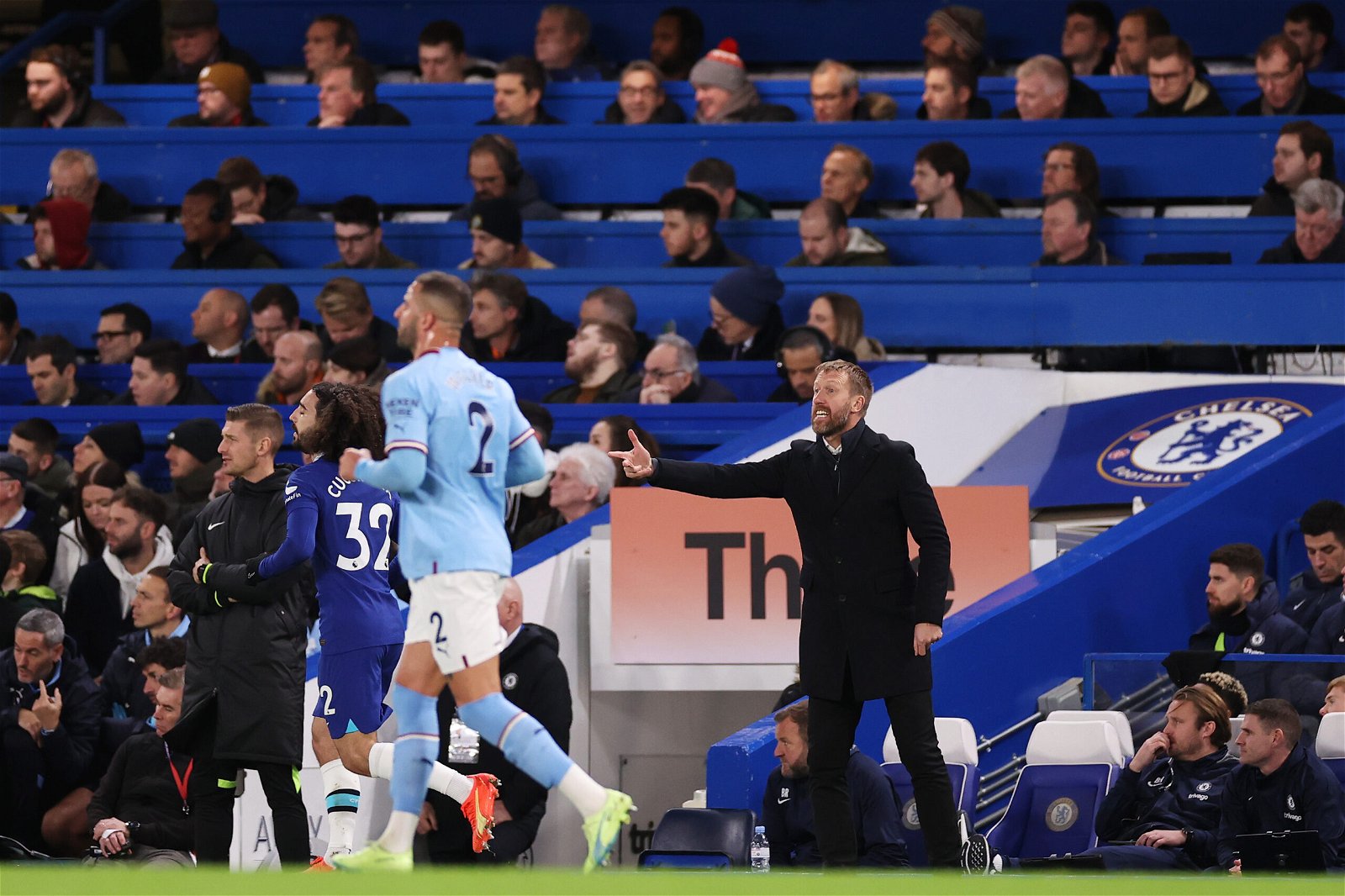 Chelsea’s rotten form in the Premier League continued against Manchester City with a 1-0 loss after Riyad Mahrez scored the only goal at Stamford Bridge on Thursday evening.

Graham Potter’s side have won just once in their last six fixtures and fall to 10th in the league standings.

It was an improved performance from The Blues on the night, but Pep Guardiola’s substitutes made all the difference as City collected an important three points in the title race.

As expected, the visitors controlled possession of the ball in the opening proceedings but The Blues were solid in their defensive block and ceded few chances.

However, Chelsea’s task on the evening was not helped when Raheem Sterling, who was playing his former side, pulled up with a hamstring injury five minutes in. He was replaced by Pierre-Emerick Aubameyang.

Chances were hard to come by for either team in the opening exchanges but the first opportunity fell to Christian Pulisic. Marc Cucurella kickstarted an attack on 16 minutes after pickpocketing Joao Cancelo on the left flank.

The Spaniard drove towards the box and played across to Kai Havertz on the edge of City’s box. He perfectly timed a pass through to the onrushing Pulisic, whose attempted shot was smothered with a brilliantly timed tackle from John Stones.

“It never rains, it pours” was Graham Potter’s assessment on Mason Mount’s injury pre-game and the showers continued into the game as Pulisic was the next Chelsea player to fall to injury.

It was just 17 minutes into the encounter when the American fell to the ground after a clash with Stones. He was visibly upset and despite attempting to try and come back onto the pitch, he was eventually replaced by Carney Chukwuemeka.

The 19-year-old didn’t take long to introduce himself to the game. Minutes after entering the fray, he found himself on the end of a Havertz pass into the area but couldn’t connect well. Hakim Ziyech then stung Ederson’s gloves with a powerful strike from the left.

Chelsea were creating whilst also keeping Guardiola’s side quiet, but a timely reminder of what they are capable of came after 38 minutes.

It took just two passes for The Citizens to cut the hosts completely open. İlkay Gündoğan received in a pocket on the half-turn and immediately played Erling Haaland through, but the Premier League’s top goalscorer could not find the target with his effort.

On the turn of half-time, Chelsea were inches away from taking a deserved lead after Chukwuemeka’s strike could only find the post.

The dangerous winger received the ball in transition and drove toward the box from the left. Cuccurela was offering an option on the overlap but the confident wide man came inside and struck a low and powerful shot at Ederson’s goal, who was thankful to see the effort strike the wrong side of his near post.

Following the interval, City made two changes; with Manuel Akanji and Rico Lewis replacing Kyle Walker and Cancelo; and they started the half with fire in their belly.

Chances in the early minutes of the second period fell to Nathan Ake and Kevin de Bruyne, with Chelsea having the crossbar and Kepa Arrizabalaga to thank for the scoreline remaining level.

The Blues went close to giving the current Premier League champions a sucker punch on 56 minutes, however. Thiago Silva’s thunderous strike inside the box was deflected wide after a great cross into the area from Chukwuemeka.

Unfortunately, it was just seven minutes later when Guardiola’s following two substitutions in Jack Grealish and Riyad Mahrez combined to put City into the lead.

The visitors attacked from right to left and Grealish found his teammate with a low cross that left Kepa scrambling and allowed the Algerian, who ghosted past Cucurella on the far side, to smash into an empty net to make it 1-0.

Potter added Omari Hutchinson, Lewis Hall and Connor Gallagher to the game with just over 20 minutes left in an attempt to claw one back against City. Interestingly, Aubamenyang was one player replaced.

It was an energetic encounter following these changes and the last chance to pull level fell to the talented Hall in the last minutes of the match. A quick counter led to the teenager receiving the ball on the left side of the box but his effort was over the crossbar, with the whistle blowing minutes later.

Potter will be able to take positives from the performance of several players but with more difficult fixtures coming later this month, not getting anything from the game will sting.