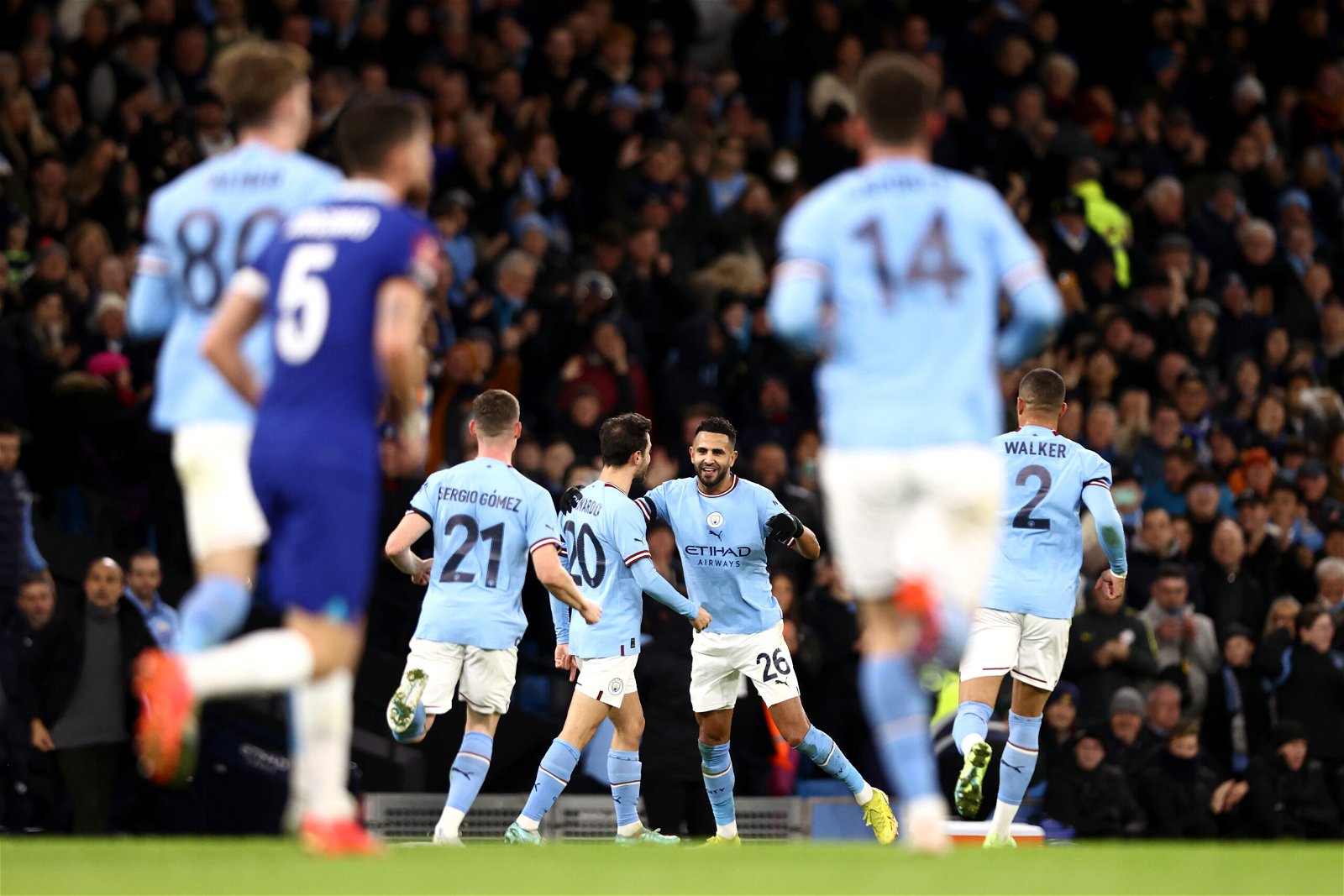 A Riyad Mahrez double, and goals from Julian Alvarez and Phil Foden saw Manchester City thump Chelsea and knock them out of the FA Cup on Sunday evening.

From minute one it was the hosts who took charge of this clash, they dominated the early possession and before long they found the back of the net.

Having scored in midweek against Chelsea, Riyad Mahrez struck once again versus the Blues, directing a splendid free-kick into the top corner in the 23rd minute.

Seven minutes later, Pep Guardiola’s side had a second, this time from the penalty spot after a Kai Havertz handball, Julian Alvarez squeezed his penalty past Kepa Arrizabalaga who got a touch on it but failed to prevent it from going in.

Things continued to get worse for the west London side, a third goal was added before half-time, this time from it was Phil Foden who converted after Kyle Walker had cut the ball back across the box.

The first 45 was a concerning one from Graham Potter’s men, during the break he made changes, David Datro Fofana was introduced for his debut replacing Havertz and Mateo Kovacic was substituted off for Denis Zakaria.

In the second half, the game rather fizzled out, the hosts were in cruise control and the visitors failed to offer anything really to cause City any concern.

The rout was completed in the 85th minute as Mahrez doubled his tally for the day and made it 4-0 to the hosts.

After the criticism he received following the Blues’ defeat to City in midweek, the Spaniard would have hoped to come away with a good performance at the Etihad Stadium. There was little he could have done about Mahrez’s wonderful free-kick, but he will be disappointed to have not saved Alvarez’s penalty. This defeat is not to be blamed on him, but he can do better.

Slotting in at right-back is not a usual role for Chalobah and it would be a surprise to see him play there again. Due to injury issues he took on this position, but he did not look particularly comfortable. Again and again City found space on the wings and were able to utilise it extremely well. He will be hoping in upcoming weeks he can return to playing more centrally.

The young defender’s inexperience showed, however he was not outshone by his far more experienced counterpart at the back, Koulibaly. At just 19-years-old, it is always going to be tough getting thrown into a game like this, so he should not be judge too quickly. Hopefully in the future, he can build on the positives from this display and get more opportunities to impress in a Chelsea shirt.

After putting in a decent shift with Thiago Silva on Thursday night, the Senegalese centre-back looked off it at the back. With his experience and leadership he should be the one taking charge and organising the backline, but the Blues looked completely out of shape and were dominated. For Foden’s goal both he and his defensive partner, Humphreys, left the England international wide open in the middle of the box. Also decided to bundle into Foden and gifted them a fourth from the penalty spot.

Was in for a tough battle against the tricky Mahrez who was once again fantastic against the Blues. Hall struggled to keep up, but did have some positive moments when in possession. With Ben Chilwell still out injured, he is a clearly a good option for Potter and Chelsea to have but there is still a lot of development to be made to his game, which is no surprise.

Normally takes control and manages to win the midfield battle, but couldn’t do it against City who were able to pick the Blues apart. The Croatian is capable of much better and he knows it.

Handed the captain’s armband for this contest, the Italian did not turn in a particularly impressive display. City had control of the midfield and he did not get the time on the ball that he wants, was overrun and outplayed.

Sloppy mistakes in the middle of the park were the main issue for Gallagher, you can tell he is trying to get things started and progress the ball forward but it was not quite coming together. His passion and determination is a positive, but he has to control his frustration and not allow it to get the better of him.

Failed to have the impact on the match he would have wanted, if he wants to continue being a starting figure, he needs to find ways to involve himself. Was little creativity, and no real desire from the Moroccan to help Chelsea get something from this game.

Hardly had any involvement in the game, really poor display from Mount who should be one of Chelsea’s most dependable players. Did muster the Blues only shot on target that was deflected wide for a corner. Perhaps needs some time on the bench, as there are others who are playing with more hunger and at a better level.

A simply baffling decision from the German handed, excuse the pun, City a 2-0 lead that essentially killed the game for Chelsea. What went through his mind to decide to raise his arms up and punch the ball from a corner taken by the hosts just does not make sense. He offered nothing going forward in the first 45 and was hooked off at half-time, he needs to step up in games like this, not shy away.

Having completed a transfer from Molde FK the Ivorian earned his first Chelsea appearance after coming off the bench at half-time.

Should be one of the first names on the team sheet. Every time he has been involved he plays with hunger and desire, clearly wants to do everything he can to help the team, other players in the team should look to him as a role model and match his intensity and energy.

Offered very little, was not much he could do to help as the west London side were thumped.

After coming off the bench in midweek and struggling against the same opponents, the youngster offered more in this contest. The signs of improvement are there, but needs to continue going in that direction.

Would have been nice to see him play a bigger role after how he performed in midweek.

Man City 4-0 Chelsea: Blues crash out of FA Cup on grim afternoon for Graham Potter’s side