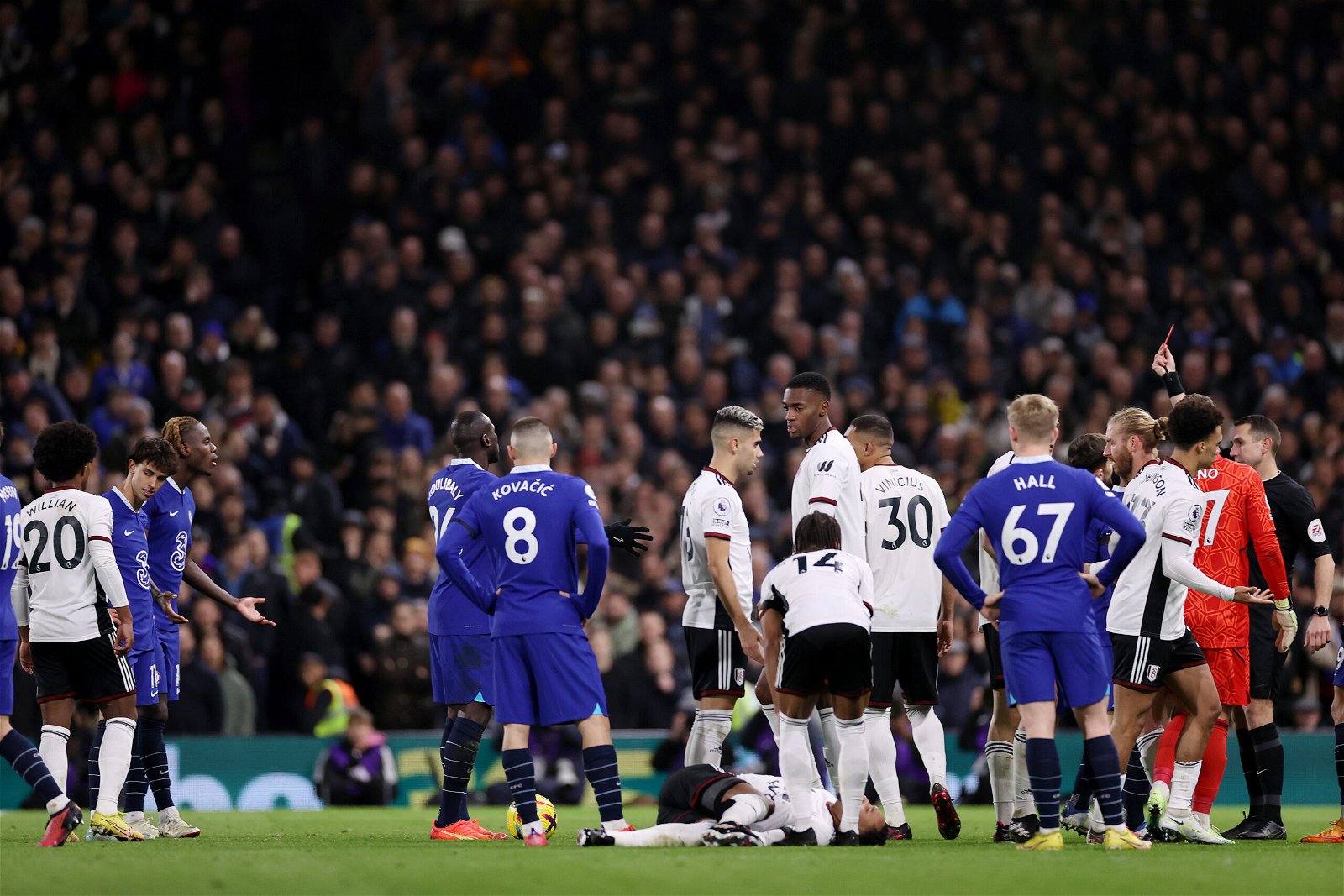 10-man Chelsea came away with nothing from Craven Cottage on Thursday evening after suffering a 2-1 defeat in the west London derby clash against Fulham.

The hosts struck first in this contest as Willian’s deflected effort off of Trevoh Chalobah opened the scoring after Chelsea had failed to clear their lines at the back.

While Joao Felix was a bright spark on his debut, creating space and driving forward, there were few other positives in the opening 45 minutes for the Blues.

The second half began in superb fashion for the visitors though, a Mason Mount free-kick hit the post but fell to Kalidou Koulibaly who was able to prod home an equaliser.

Chelsea would have hoped to have pushed on in search for a winner following this, but in the 58th minute debutant Felix received his marching orders for an awful challenge on Kenny Tete.

The Blues tried to hold out, but a delivery from Andreas Pereira picked out Carlos Vinicius who headed the hosts into the lead with just 17 minutes to go.

There was no late drama, as Chelsea failed to find a goal in the closing moments, this result sees the Blues hold just one win from their last nine in the Premier League.

Both sides started brightly in this contest, Chelsea were largely in control though, with their new Portuguese star at the centre of a lot of their positive play.

There was a scare in the 16th minute for the Blues when Denis Zakaria challenged Vinicius in the box, there was a VAR check to determine whether it was a foul but ultimately they decided to stick with the on-field decision of no penalty.

Just seven minutes later, the hosts were handed a massive opportunity, a poor header from Chalobah allowed Fulham in behind, the ball fell to Bobby Decordova-Reid and his shot cannoned back out off the bar.

Clearly this was not enough warning for Chelsea to step up their game as moments after seven-year servant at Stamford Bridge, Willian saw his effort deflect off Chalobah and find the back of the net. The Brazilian did not celebrate, but was delighted to have his side in front.

The Blues looked to respond quickly, Lewis Hall’s deflected effort forced Bernd Leno into a good save, which ended up being the best Chelsea could offer until the half-time interval.

Fulham headed into the break with the advantage, and Graham Potter’s side had a big task on their hands to turn things around in the second half.

The second half could not have started any better for the visitors, Hall drew a free-kick down the left-hand side in a dangerous position for Chelsea.

Mount whipped in an effort that struck the post, but fortunately it fell to Koulibaly who was able to prod the ball into the net in the 47th minute. It was a vital goal for the Blues and it put them in a good position to get something from this game.

However, the good times did not last too long at all, despite putting in a stellar display, Chelsea’s new boy Felix was shown a red card for a high challenge on Tete.

This moment halted any momentum the visitors had picked up from the goal and left them with a tough fight to pick up a result against seventh place Fulham.

Eventually the pressure told, a wicked delivery from Pereira caught out Kepa Arrizabalga and the Chelsea defence and allowed Vinicius to restore the hosts’ lead.

Despite leaving his side unchanged a few moments after the goal, Potter opted to bring on four players, Marc Cucurella, Carney Chukwuemeka, Conor Gallagher and Hakim Ziyech to try and find a late equaliser.

Kai Havertz had the Blues best chance in the closing moments, a long-ball over the top sent him in behind, but Leno was able to deal with the strike relatively comfortably.

Ultimately, Chelsea failed to muster a comeback and as the full-time whistle blew, the Blues seventh defeat of the Premier League season was confirmed.