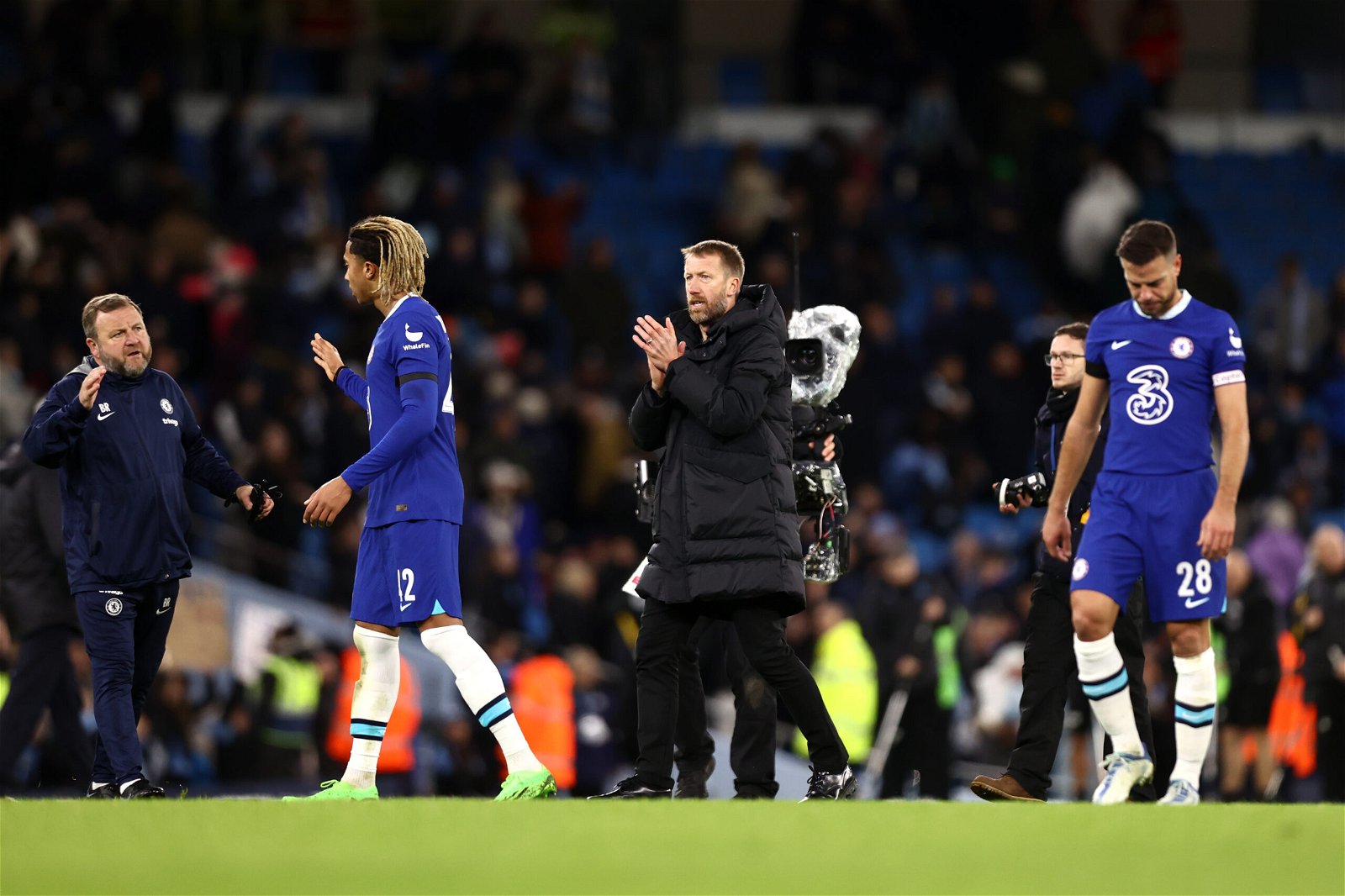 Chelsea fans made their feelings known after falling to a 4-0 defeat at the Etihad Stadium to Manchester City.

Riyad Mahrez opened the scoring in the first half with a sublime free-kick before goals from Julian Alvarez and Phil Foden added to the scoreline before half-time.

Mahrez netted a late fourth for City as Graham Potter’s side fell to yet another defeat, with the pressure mounting on the Englishman.

While Pep Guardiola urged Chelsea to remain patient with their head coach, two defeats in a matter of days to Man City has seen pressure upped on Potter.

Despite the loss, the Blues faithful were in fine voice throughout, spending the majoirty of the 90 minutes paying tribute to the late Gianluca Viallia after his passing this week.

Chelsea’s players warmed-up with the number 9 on their backs in memory of the Italian before a minutes applause was immaculately observed by all those in the stadium.

However, the chants soon became toxic as Chelsea went 3-0 down, with the Blues faithful sending a clear message to the board.

With the game all but over, the away end at the Etihad heard chants of former owner Roman Abramovich’s name before a chorus of ‘We’ve got super Tommy Tuchel’ followed.

This comes as the pressure is increased on Potter, who is out of the FA Cup, League Cup and sits 10th in the Premier League with Chelsea.

The head coach commented on the transitional period at Chelsea earlier this week, stating that he understands the difficulty that the supporters have in accepting change following the Abramovich era.

He said: “I would always feel lucky to be at Chelsea because I am grateful and privileged to be here. I understand where you are coming from but there is a completely different ownership than there was. That is hard for some people to get their head around because for 20 years Chelsea was one thing and now all of a sudden it’s different.

“Yet people still think back to what happened in the past 20 years. That is normal but it is completely different. But again, the reason for me to take the job was the chance to shape a club that is in a massive transitional period. It’s huge. Twenty years is a long time to have that leadership and then to change.

“With that, I knew there were going to be extreme challenges for sure. It’s not like I jumped at the first opportunity to leave Brighton, I had other opportunities to leave if I wanted to previously. But this one felt right because of the owners, because of the support I felt they would, and that has proved to be the case. They’ve been fantastic.”