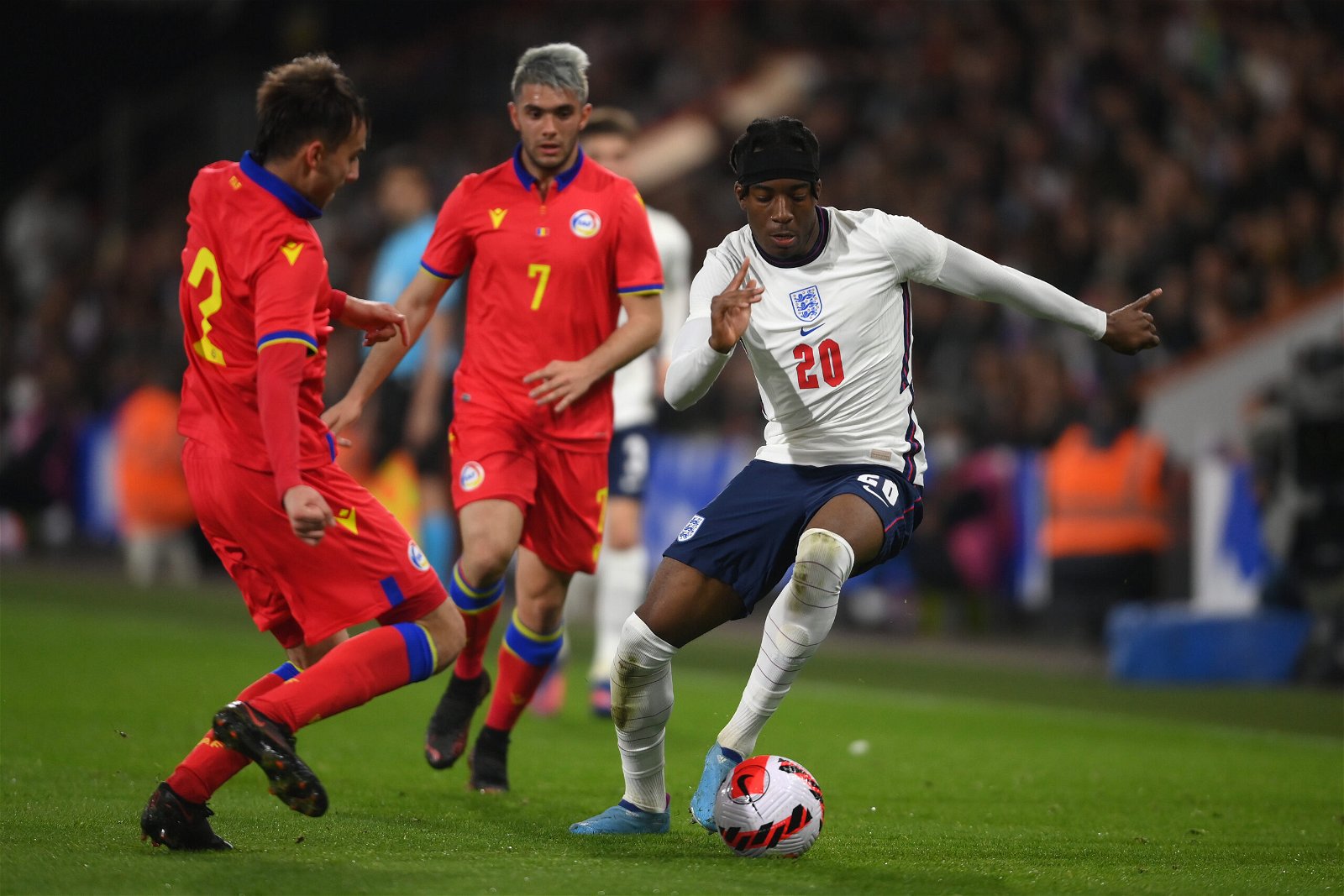 Chelsea wrapped up the signing of 20-year-old Noni Madueke from PSV Eindhoven for a fee of in excess of £30 million – continuing the club’s huge spending spree under the Todd Boehly-Clearlake Capital.

The Blues have now spent £460 million on new talent since July 2022. While the signings of David Datro Fofana, Andrey Santos and Benoit Badiashile this window represent a long-term approach to the market, the understanding is that Madueke as well as Mykhailo Mudryk will have a more instant impact at Stamford Bridge for the remainder of the season.

Not 21 until March, Madueke aligns with Boehly’s vision of investment in elite U23 talents as Chelsea look to rebuild an ageing squad composed of signings from various different managers under the old regime.

Described by BBC Sport in 2021 as a “direct, powerful and versatile attacker” inspired by Cristiano Ronaldo, the winger will look to compete with existing wide options as Chelsea seek a positive end to the Premier League season, as well as progression in the Champions League.

What has been Madueke’s career trajectory to date, and what characteristics could he bring to a Chelsea XI in the future?

Born in north London in 2000, Madueke joined Crystal Palace’s academy aged nine, before signing for London rivals Tottenham Hotspur three years later aged 14. After impressing for various youth sides, including England U16 alongside Cole Palmer and Yunus Musah, Madueke joined PSV in the summer of 2018, rejecting an offer from Manchester United in the process.

Speaking of the move in hindsight, the youngster said: “I didn’t have to follow the same route that most people took. I thought: whatever I do, I’m going to rise to the top. I went abroad because it just made more sense in terms of breaking into the first team.”

This strategy was subsequently replicated by the likes of Marcus Edwards and Jude Bellingham in years to follow, the youngsters moving to the continent seeking a more concrete passage into regular first-team football.

After a season in the Jong PSV youth side, Madueke made his senior debut aged 17 in January 2020 off the bench away to VV-Venlo in a 1-1 draw, picking up a further three appearances off the bench as PSV finished fourth, six points off eventual winners Ajax. The following season (20/21) was a real step up for Madueke; the winger featured in 24 league games, scoring seven and assisting a further six – the fourth-most combined goals and assists in the squad as the Rood-witten recorded a second-placed league finish.

Madueke flourished in a dynamic attack alongside Cody Gakpo, Donyell Malen and Mohammed Ihattaren – primarily starting off the right wing whilst also picking up minutes in a central role, recording the second highest successful dribbles per 90 in the squad behind Gakpo with 1.6 per 90, catching the high with his rapid pace and tricky dribbling. Madueke also got his first taste of European football – featuring in all but one Europa League Group Stage game, scoring and assisting at home to PAOK Salonika.

Madueke suffered with a muscle injury as PSV finished second last season with 81 points, two points behind champions Ajax, although he racked up 35 appearances in all competitions, including three in the Europa League, scoring nine and assisting six, cementing his place on the right of the attack. His partnership with Gakpo continued to blossom – the two forwards again ranked highest in the squad for the most successful dribbles per 90, with Madueke’s figure improving to 2.4, the fifth highest in the league. The youngster also won his first senior silverware as PSV won their 10th KNVB Cup, although he missed the final against Ajax through injury.

This season, Madueke missed the opening 10 league games with an ankle injury, although returned to the side home and away to Arsenal in the Europa League, and scored against NEC Nijmegen in the league. Despite his injury concerns, his explosiveness in dribbling remained; ranking highest in the squad for successful dribbles per 90 with 2.2, a slight decline from last season. His superb ascent in European football saw the winger linked to the likes of AC Milan and West Ham United, before joining Chelsea on a seven-and-a-half-year contract this window.

A versatile attacker, Madueke has experience operating across the front three, featuring in a central role early on at PSV, as well as occasionally off the left, although the bulk of his minutes have come in a right-wing role, where can cut in on his powerful left foot. In the 2020/21 campaign, PSV alternated between a 4-4-2 and 4-3-3 approach, Madueke rotating with Mario Gotze off the right – whilst last season the Boeren primarily set up with a 4-2-3-1 approach, Madueke roaming behind striker Eran Zahari who acted as the focal ‘number 9’. This can be seen his heatmap in the Eredivisie last season.

An impulsively attack-minded forward, Madueke’s advanced statistics paint a very promising picture given Chelsea’s lack of goals and offensive venom in recent seasons. When compared to other attackers in Europe’s ‘top five’ leagues, Madueke ranks in the top 4 percent for both non-penalty expected goals and expected assists per 90 with 0.6 and 0.36 respectively. In comparison to Christian Pulisic with 0.29 and 0.17 and Hakim Ziyech with 0.17 and 0.25, this is a huge and marked upgrade.

In a Chelsea side often criticised for lack of attempts on goal, Chelsea 11th in the Premier League with shots on target to date with 80, Madueke shows a constant eagerness to shoot – his 4.56 shots per 90 also ranks him in the top one percent. Additionally, many of his shots are accurate and on target – his 2.1 shots on target per 90 again ranking in the elite one percent group. For comparison, the latter figure is 3.5 times that of fellow winger Pulisic.

As well as possessing a scoring threat and the willingness to shoot frequently (and accurately), Madueke’s dribbling and passing statistics are also very exciting on paper. His 2.55 passes into the penalty area per 90 ranks in the top seven percent, providing constant goal scoring chances for Kai Havertz in attack – the German often unable to find himself with an abundance of clear scoring opportunities.

Madueke has also been extremely pacy and direct dribbler from a young age; his 53.1 percent successful dribble completion rate is by no means elite compared to other European attackers, although his output of 4.74 dribbles completed per 90 is exactly three more than Pulisic’s – evidencing that he completes a lot of dribbles by attempting a huge amount throughout the game.

Madueke’s majestic rise at PSV aged just 20 has rightfully earned significant praise. Saul Isaksson-Hurst, one-on-one specialist coach, described the winger as “a mentality monster”, saying: “Noni’s super-strength is cutting in from the right and working with his left foot, a bit like Arjen Robben. He has everything. He is technically unbelievable. Physically, he’s a specimen — but most important are his mentality and desire to be the best.”

Graham Potter has also been full of praise for the winger. Upon the confirmation of his signing, he said: “Noni is a young player, an exciting player, a wide player that can give us balance and competition in that area, we’re excited to have him, I think the supporters will really enjoy him.”

With Madueke just 20 and fellow signing Mudryk only just 22, Chelsea may have found the long-term solutions in their wide options for years to come. With Christopher Nkunku set to arrive in the summer, as well as the potential of Joao Felix’s loan move being made permanent, the future is certainly bright for Chelsea in attack.

Player Profile: Who is Malo Gusto and what can he bring to Chelsea?

Player Profile: Who is Benoit Badiashile and what can he bring to Chelsea?