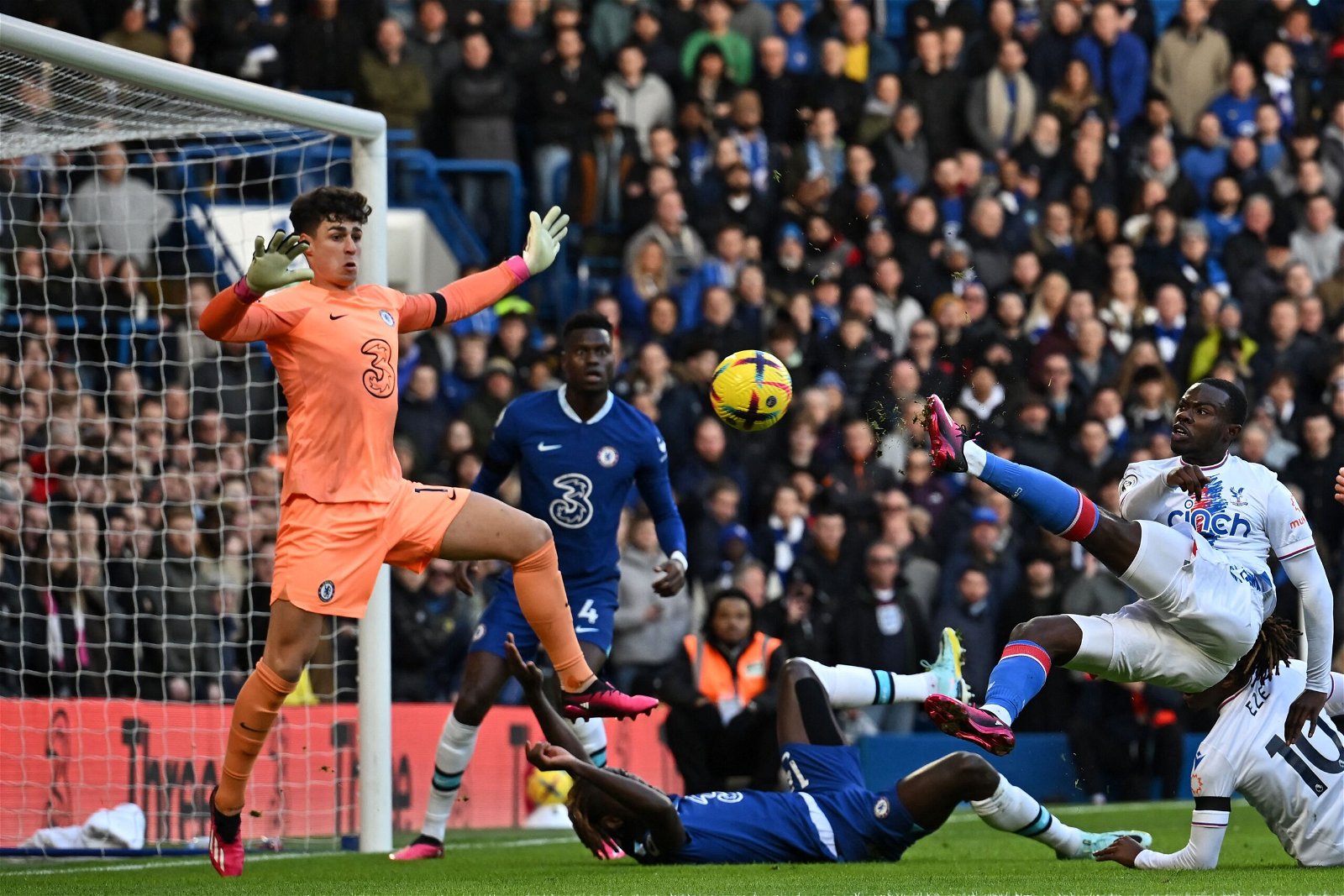 Chelsea bounced back to winning ways with a hard-fought 1-0 victory over Crystal Palace at Stamford Bridge on Sunday afternoon.

A moment of synchronised inspiration between the attacking duo of Hakim Ziyech and Kai Havertz was the difference-maker on the afternoon, finally breaking a spirited and gusty Palace outfit who had stood toe to toe with the Blues for the duration in the main.

That was evident in the first period, with Kepa Arrizabalaga called into action on three notable occasions to deny the Eagles the opener. Yet his Spanish compatriot Vicente Guaita was equally pulling out some heroics in between the sticks.

After a frantic end to the first-half saw both goalkeepers make solid saves with the game end to end, it was a well-earned breather for Graham Potter’s side who had been much improved on their recent poor performances.

Havertz had wasted a gilt-edged opportunity by heading over the bar in the first period, but he didn’t make that mistake when it presented itself again in the 64th minute – rising highest to meet a peach of a cross from Ziyech.

The Pensioners went on to grind out the win, which will lift the mood of everyone around the club ahead of a huge match-up against Liverpool next Saturday. Until then, here is how Absolute Chelsea rated the players’ performance during Sunday’s win at Stamford Bridge.

A few moments of shakiness when the ball was launched high into the box aside, the Spaniard made a trio of big saves throughout the first period including a brilliant claw-away at a corner on the cusp of the half-time interval. The showstoppers simply followed thereafter, and he was one of the major contributors to the three points.

Struggled to keep pace with Eberechi Eze in the first period but grew into the occasion, and when Eze was withdrawn it seemed like he had shaded the battle. A couple of alert blocks late on also contributed to Chelsea seeing out the victory.

Faced a potentially tricky task up against the pace of Jordan Ayew and Wilfried Zaha, but they were no match for this wily old fox. He swept up advance after advance like meat and drink, proving totally impregnable and effectively reducing Palace to relying on strikes from distance for their truly best chances. Almost nabbed a goal of his own too.

As far as debuts are concerned, this is about as calm and collected as it comes. Plucky veteran Wilfried Zaha tried a few times to rough him up and unsettle the young Frenchman, but he seemed completely unbothered and unfussed. Certainly demonstrated a composure beyond his years and one that is conspicuously absent from the man he replaced in the starting line-up today.

If this young man had the finishing to match the facets of his game which are already mature beyond his years, he’d be quite the package. Showed great feet from the off and was a constant thorn in the side of Nathaniel Clyne, but the finishing touch eluded him – none more so when he conspired to fire off target with the goal gaping in the first half. Not defensively perfect, although Michael Olise would be a tough task for anyone, particularly someone not in their natural position.

Kept the engine room ticking over quite nicely and was an assured senior head among his youthful peers, save for a few lapses of concentration which left the Blues scrambling a couple of times.

A highly competent showing – and possibly audition – for a one-time loan hit for today’s opponents. Combined particularly well on a number of occasions with Hakim Ziyech on the right flank, with the pair asking difficult questions of the Palace defence. Gallagher otherwise kept it very simple when he found himself in the centre of the park, moving the ball on quickly and driving into space. An absolute warrior late on, never shying away from the thrill of the fight.

Fully merited his inclusion after weeks of impressive cameos in difficult circumstances, but it was a tough ask to make things happen up against Palace’s compact deep block. Did the fundamental basics well, but that was about the sum of his contribution.

A pretty tame day out for Chelsea’s talisman, with most of the Blues offense coming from the opposite side of the field. Worked hard defensively and also fashioned a very handy chance to seal the win, which would have been the case but for Havertz and Pierre Emerick-Aubameyang miscommunicating.

A real handful for the Eagles and the one who looked the most likely to make something happen. His deliveries and his touch was immaculate more often than not, and even those that went awry showed good intent and initiative.

Spurned a glorious opportunity put to him on a silver platter in the first half by Ziyech, and a player of his purported calibre and price tag simply has to take those chances. So when that same eventuality came to pass in the second half, his persistence paid off, crashing home a fine header in a crowded penalty area. Full credit for his endeavour – not the easiest afternoon, but kept his head down and got his just reward.

One or two decent openings went untaken, but his introduction asked questions of the Palace defence and gave them another runner to worry about. Put a shift in at the end to give Chelsea an outlet out of the box.

Coming on to replace Lewis Hall at left-back must have felt a tad unfamiliar to the Senegalese giant, but he did his bit and made one superb block in particular as the Eagles pressed to bring the game to level terms late on.