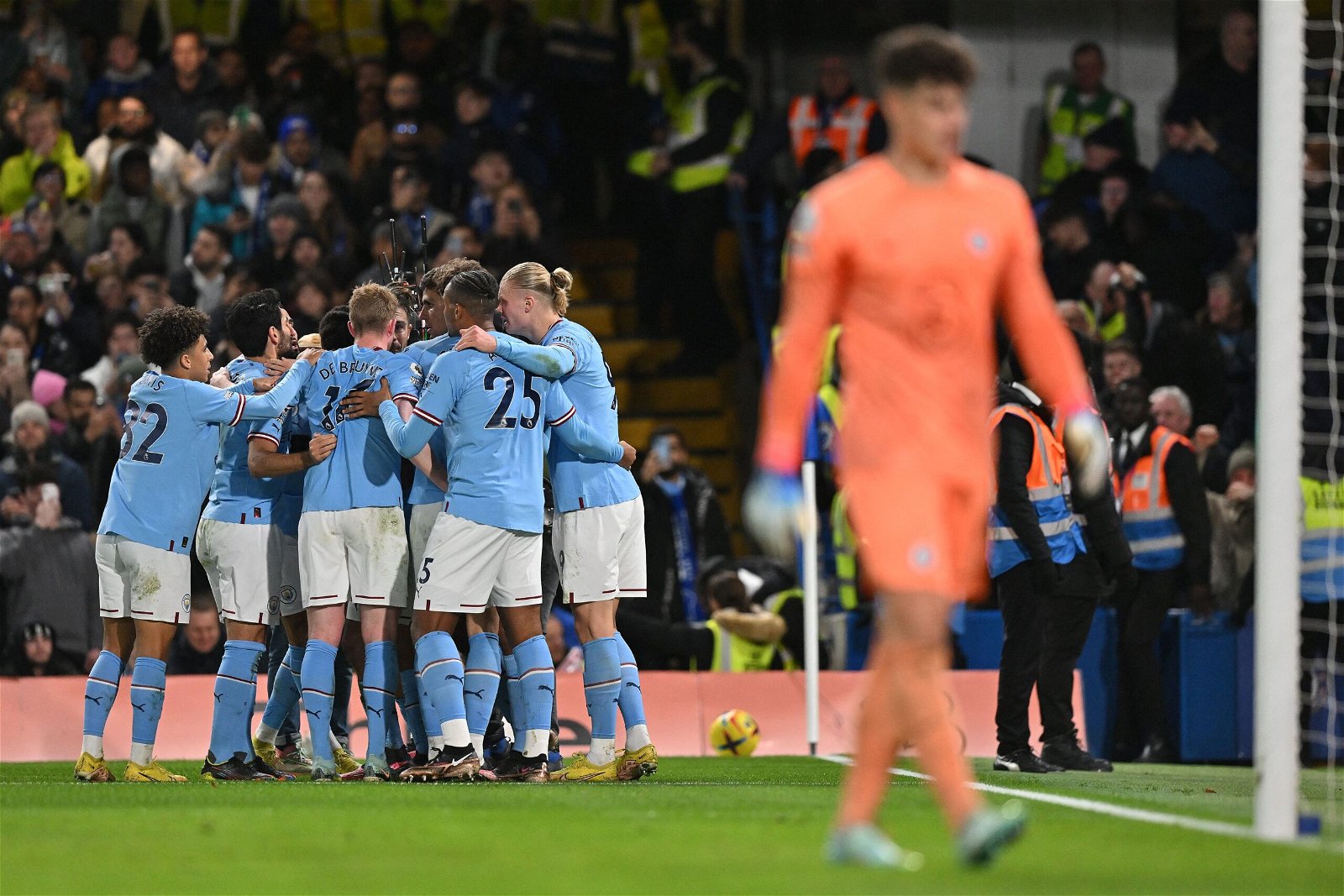 Chelsea started the match well, they manage to get a hold of the game and were looking the more likely to take the lead.

They were dealing with any threats poised by the visitors relatively comfortably, making for a largely positive start, however there were two huge negatives that came in the early stages as well.

Both Raheem Sterling and Christian Pulisic had to be withdrawn from the game due to injury, which saw both Pierre Emerick-Aubameyang and Carney Chukwuemeka enter the fray.

It was actually substitute Chukwuemeka who ended up coming the closest to breaking the deadlock before half-time, his shot from the edge of the box bounced out off of the post to deny him his first Chelsea goal.

The teams headed into half-time level, but the hosts were looking more comfortable than their opponents.

In the second half, Man City stepped up their game, Nathan Ake nearly put them in front, his header from a curling delivery was denied by the woodwork.

The visitors continued to push, and eventually the pressure told, Jack Grealish picked out Riyad Mahrez at the back post to fire them into the lead.

Given the first half display from the Blues, this was disappointing, Graham Potter responded by introducing some of Chelsea’s youth talent and he even handed a debut to Omari Hutchinson hoping they could inspire a comeback.

Unfortunately for Potter, Chelsea failed to find a late equaliser, Lewis Hall had an opportunity in added time but blazed over, sealing the fate of the Blues.

Showed his confidence throughout the game by dominating his area, he claimed crosses and made some good stops as well. Will perhaps feel disappointed by the goal he conceded, looked to be caught in two minds when Grealish’s pass fizzed across the box in front of him.

Looks to be becoming more and more settled in a Chelsea shirt. Initially the Spaniard was seemingly out of depth when playing for the Blues, but he has found his feet. Was involved in some nice moments down the left-hand side and was defensively solid. There are still a few shaky moments which he needs to eliminate from his game, but hopefully he can carry on improving.

Chelsea opted for their experienced duo once again at the back. The pairing of Kalidou Koulibaly and Thiago Silva worked delightfully, but they still failed to keep out City. The Senegalese defender battled for everything he could, challenging in the air and on the ground. When the Blues signed him from Napoli, these are the kind of performances that were expected.

The Brazilian was classy as ever, despite being faced up against one of the most physical and dominating forwards in the game, the 38-year-old and his defensive partner, Koulibaly, managed to keep the man who has scored 21 Premier League goals this season relatively quiet.

There was not much involvement from the Captain in this contest, he did not manage to get up the pitch and help Chelsea create chances really. The goal scored by City also came down his side, which will leave the Spaniard disappointed.

It was a huge boost for the west London side to have their Croatian star back in the centre of the park. The midfielder always performs to high level and he was a key figure against City. He was quick to press and made some crucial tackles to prevent attacks from the opposition.

A partnership with Kovacic in the midfield worked extremely well, the two seem to compliment each other nicely with their styles of play. His driving power and fighting spirit are very important, while Kovacic is the more technical of the two. Having started the last three for the Blues, the Swiss international is continuing to grow in confidence and it’s difficult to find a reason as to why he should not be consistently selected.

Whenever the Moroccan cuts in on his left foot, there is always a sense of expectation. While he manage to craft himself good opportunities and space, he failed to find that moment of magic. In what was just his second start of the Premier League season he made a good account of himself, he has more to offer and will likely get more opportunities in the coming weeks.

Just five minutes into proceedings the forward was forced off due to injury, he would have been relishing the chance to play against his former club but he did not get the chance.

Despite looking bright to start with, the American became Chelsea’s second injury of the night, he lasted longer than Sterling, but had to be substituted just 22 minutes in.

A quieter game for the German, but one where he looked composed and confident. Was involved in some nice link up play, and did not really put a foot wrong when in possession, he is just lacking that killer instinct and bit of magic that he is most certainly capable of.

Does not seem to be getting the service he desires and is struggling for involvement. Looks slightly out of rhythm and ended up getting subbed off in the second half after only coming on in the first 45. Had some nice moments but Clearly Potter does not fully trust the Gabonese forward to make the difference when it matters.

Coming onto replace Pulisic early in the game, the 19-year-old was handed a huge opportunity to impress against Guardiola’s side. He brought a burst of energy following his arrival and nearly capped off a super first half but his strike rebounded out off of the post. He continued his fine display in the second half, but it was not enough to help Chelsea get anything from the match.

Did not have a ton of involvement down the right-hand side, but it was always going to be a tough ask coming on to make his debut against the team currently in second place. Will be hopeful of more opportunities.

Found some good space on the left, and had a positive impact going forward. The youngster squandered a huge chance in the final moments of the game, he went for glory but there were other options in the box.

Brought some fantastic energy after coming off the bench, riled up the crowd with his intense pressing and determination. Needs to be careful that does not result in him making any clumsy errors as he can look a tad too aggressive at times.