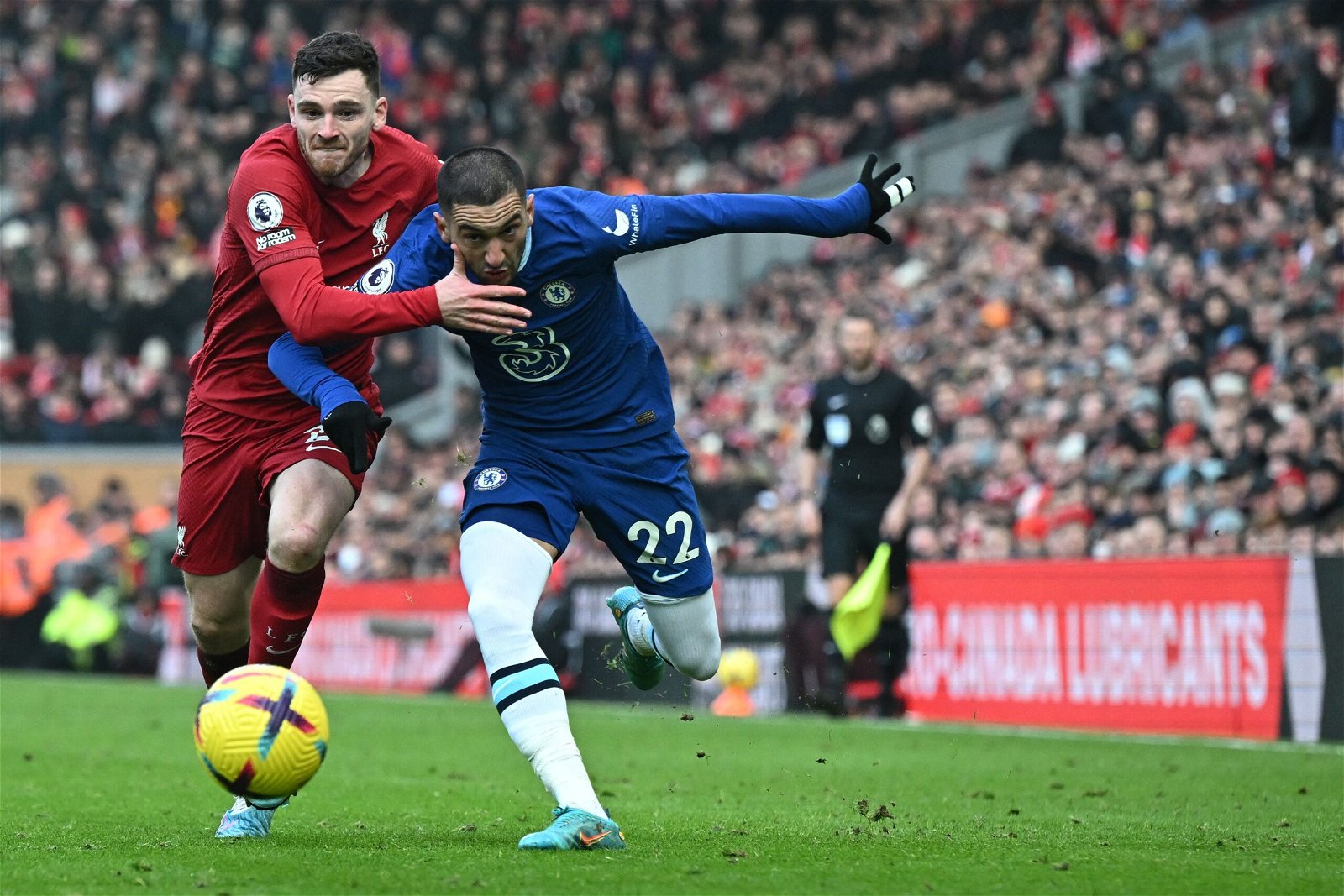 Chelsea and Liverpool shared the spoils after a breathless 0-0 stalemate at Anfield on Saturday afternoon.

A scrappy showdown between two strugglers ended with both teams taking a solitary Premier League point each, after a chaotic game that ebbed and flowed.

It looked like the perfect start for the Pensioners after Kai Havertz bundled home from a corner in the second minute, yet VAR dubiously adjudged the striker to be offside. Chelsea continued to be in the ascendancy, with Alisson pulling out a superb save to stop Benoit Badiashile’s goalbound header on the half hour mark.

Plenty of entertainment was to be had in the first half, but scant little quality – particularly in the final third. In spite of this, head coach Potter will have been encouraged that his team had shown up to Anfield and really could have been two or three goals up, albeit the need for a goal to reward that dominance before the Reds could get back into the game was sorely needed after the break.

Jurgen Klopp had seemingly galvanised his side, putting the world champions under intense pressure after the resumption. Yet Chelsea came on strong again, with the introduction of Mykhailo Mudryk wreaking havoc in the Merseysider’s defence.

The winning goal was to prove elusive for both sides, however, with that final touch of quality missing. Up next for the King’s of the Kings Road is a West London derby against Fulham, with revenge on the mind.

In the meantime, here’s how Absolute Chelsea rated the players’ performances during Saturday’s draw.

Not a wealth of activity to deal with, saving most notably from Cody Gakpo at the near post. So comfortable with the ball at his feet, and even claimed a few crosses. Dependable from the Spaniard.

A pretty old-fashioned performance from the Sierra Leonean born defender. Cleared his lines well and offered some solidity to the backline.

The Brazilian’s long searching balls were almost laser-like, and his defensive nous and positioning goes without saying as per usual. Any question asked of him was answered with the minimum of fuss.

It’s early days, but there’s a certain aura about this French starlet that has all the trademarks of Chelsea quality. An imposing presence, he made some key blocks and his passing out from the back was excellent, always looking for the option to play forward rather than side to side.

No easy task being parachuted into the lineup to keep Mohamed Salah quiet, and it showed. Decent start to the game, but ‘headless chicken’ springs to mind as far as the final 45 minutes are concerned. Never inspired confidence that he had the Egyptian in hand, and struggled to shut out James Milner of all people too, with the greatest of respect to the aging veteran.

Not quite the usual metronomic standard of finding his colleagues, but he did cover some serious ground in the defensive phase. One moment in the first half showing the cunning genius of this wily old fox, launching himself to the floor with grace and decorum to buy a foul when Liverpool were threatening in the box.

A tough day at the office for the young man. Caught cold dropping into the ‘6’ position in the build up on a number of occasions, altogether too scrappy in possession and wayward in his passing. Drew a number of fouls in moments of pressure, but that was the sum of his contribution.

Clever movement off the ball asked questions. Linked up particularly well with teammate Hakim Ziyech on the right flank, picking up space in the pockets for the Moroccan to find him. Didn’t offer much in the battle for control of the midfield and gave away too many free kicks in dangerous positions. Almost averse to taking a shot, too.

Indescribably poor, going missing when his peers needed some assistance. Sloppy with his passing and just looked a fraction off the pace at all times, failing to anticipate the play. Completely anonymous after the interval. Disappointing.

Put in quite the shift defensively and his dead ball deliveries were as menacing as Blues fans have come to expect of the magical Moroccan. There was one sequence of play in which he seemed to dribble past half of the home side’s personnel before firing just over, and he seemed to go through the gears as the game progressed.

Looked at it from the off. His pressing and work-rate was superb and the German thrived playing off the shoulder of the Liverpool high line. Effectively a one-man battering ram for large swathes of this fixture, holding up the play well and looking the most likely to force an opening.

Introduced perhaps earlier than expected as the Blues started to struggle under Liverpool’s pressure, and said introduction really stretched the play. Within ten minutes he showed a glimpse of his quality, with exquisite dribbling in a tight space to carve an opening and fire into the side-netting. Spurned a few other opportunities at the back stick, albeit difficult ones to catch on the run. A thoroughly exciting cameo.