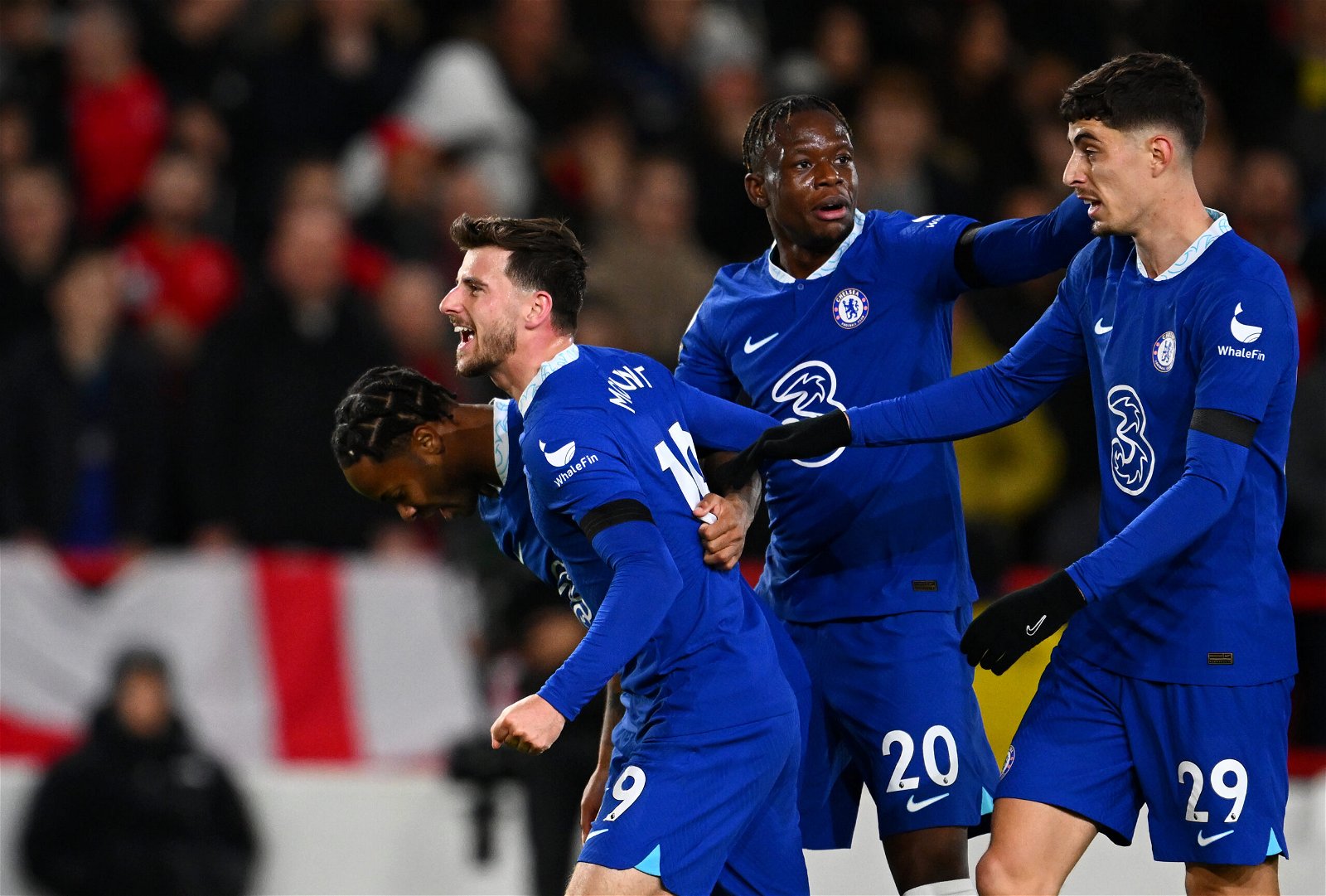 Forest hold Chelsea to a draw, in a feisty encounter at City Ground on New Years Day.

It was an indifferent start to the new year for Graham Potter’s Chelsea, as they were held to a draw by Nottingham Forest, after Serge Aurier’s second half strike canceled out Raheem Sterling’s opener.

Chelsea started the game quickly, with Mason Mount getting played in by Kalidou Koulibaly’s lofted pass in the first minute, before firing his effort over the bar.

Nottingham Forest grew into the match, and started to look dangerous on the counter attack with Brennan Johnson having an effort saved by Kepa Arrizabalaga from a decent shooting position.

Chelsea then took the lead, arguably against the run of play from an opportunistic Raheem Sterling goal in the 16th minute. Mount slipped in Christian Pulisic down the left, before his cross awkwardly flicked off Willy Bolly’s boot, looping onto the crossbar and kindly into the path of Sterling who knocked it past Dean Henderson from close range.

The first half continued at a frenetic pace, with minimal openings for either side not dampening a feisty atmosphere at the City Ground, with tackles flying in from all angles. There was still time for Chelsea to create one more chance before the break, with Pulisic’s tame effort saved by Henderson after a well worked set piece by the Blues.

With the crowd firmly behind them, Forest started the second half well, with Taiwo Awoniyi and Johnson having efforts saved by Kepa from promising openings.

Morgan Gibbs-White then rattled the crossbar with a sweeping effort from the edge of the box as Forest continued to turn up the heat on Chelsea.

Forests’ pressure did eventually come to fruition through Serge Aurier’s 63rd minute equaliser. Chelsea failed to clear their lines from a corner, with Boly keeping the ball alive before Aurier reacted quickest to slam the ball past Kepa from close range.

Nottingham Forest’s continued success prompted Graham Potter to make a series of changes to help his side gain a foothold in the game. Two of these substitutes combined to nearly give Chelsea the lead again, with Pierre-Emerick Aubameyang missing a gilt edged chance from close range, following a stunning Hakim Ziyech ball into the box.

Chelsea searched for a winner, but were unable to break down Nottingham Forest who were good value for their point throughout the match.

In the interim, here is what Absolute Chelsea made of the Blues’ respective performances against Nottingham Forest.

Kepa could not do much about the goal as it was hit past him at very close range. He did well to deny Forest on a number of other occasions, and was strong in possession against an aggressive press. It seems Kepa is better suited to Graham Potter’s system than Eduoard Mendy, and he will hope to cement the number 1 position in the coming weeks.

Azpilicueta struggled to deal with the pace and energy of Forest’s attack just as his other defensive colleagues did. Azpilicueta used all the know-how he could to limit Forests marauding forwards to mixed success

Thiago Silva was always likely to struggle against the pace and power Nottingham Forest used on the counter, however he was able to use all of his composure and experience to deal with it fairly effectively. Cleared many of the balls that came his way during the Forest onslaught, and although he ended up in a few awkward situations, he generally handled them better than his partner Koulibaly.

Koulibaly struggled to deal with the pace and power Forest were offering on the counter attack. He was lucky not to get booked early on after a few suspect challenges on Awoniyi, whom he particularly struggled to contain. However, Koulibaly was solid with the ball, and created two good openings for Pulisic and Mount which they should have done better with.

A quiet game for Cucurella, who had to handle the Forest onslaught with his defensive team mates. Cucurella is naturally quicker than Chelsea’s other defenders which helped him look more assured on his side. Tidy in possession, but a forgettable performance.

In a game that favored high octane ferocity, Jorginho was always going to find it difficult to get into the match. Jorginho although tidy in possession, wasn’t able to dictate the tempo of the game as much as he would have liked and was overrun a few times before being subbed off as Chelsea searched for a winner.

A second successive league start for Zakaria, who relished the physical battle that was on offer at the City Ground. A necessary battling presence in a midfield that may have been overwhelmed without his pace and power.

Mount was tidy in possession and very involved in the physical battle which unfolded in the middle of the pitch. He was involved in the opener, slipping in Pulisic down the left, however he struggled to truly gain a foothold in the game and missed a solid opening in the early stages as well.

Took his goal well, although some may say it was lucky, Sterling showed good instincts and anticipation to react to the ball coming off the crossbar at speed. Largely quiet apart from the goal, as he struggled to get into a game that was controlled largely by the home side.

A quiet game for Kai Havertz, as he struggled to impose himself on the game similarly to his attacking colleagues. Havertz produced less moments of individual quality than Pulisic and Sterling, but he was marked very tightly by the impressive Willy Bolly. After a strong performance against Bournemouth, Havertz must strive for more consistency moving forward.

Pulisic was Chelsea’s most lively attacker throughout the match, with many runs through the middle causing Forest issues. Pulisic won many fouls for his team to alleviate Forest pressure, and was involved in the opener with his cross eventually falling at Sterling’s feet. Should have done better with his chance at the end of the first half, with his poorly hit effort never likely to trouble Henderson.

Kovacic was brought on to stabilize the game for his side, which he was able to do eventually, but not before Forest equalized. A solid performance from Kovacic, without creating any meaningful moments.

Gallagher offered hustle and bustle, but not the necessary finesse which was needed to break down Nottingham Forest. Not a particularly impactful bench performance.

After a fantastic World Cup, Ziyech looked like he carried that confidence into this match. Attempted a few dangerous passes, including a sumptuous cross to Pierre-Emerick Aubameyang which should have warranted an assist.

Should have given Chelsea the lead late in the match, missing the ball from a fantastic position, after it was put on a plate for him by Hakim Ziyech. Aubameyang struggled to get involved in the match beyond his chance.