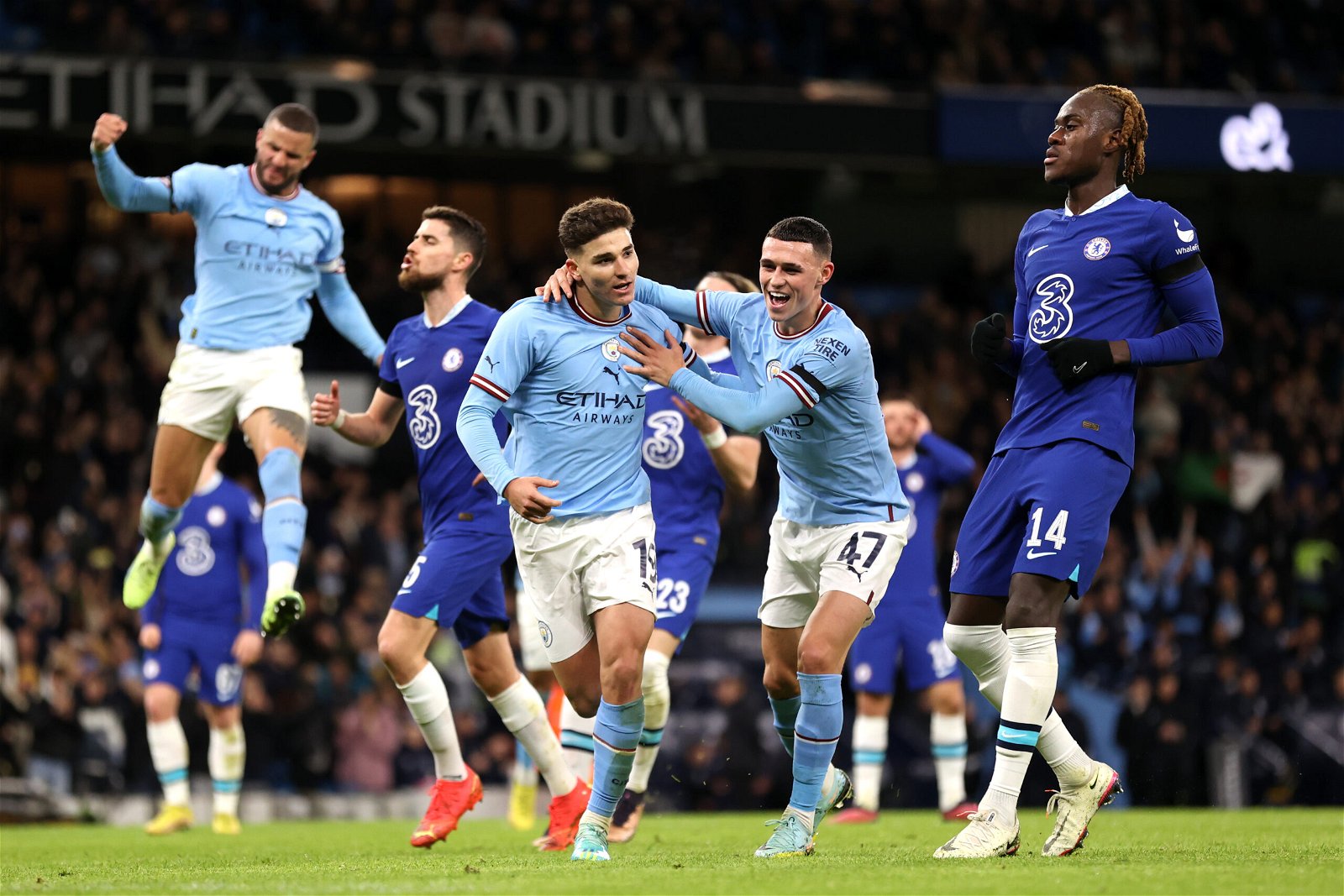 Chelsea crashed out of the FA Cup after being dominated by Pep Guardiola’s Manchester City at the Etihad on Sunday evening.

Riyad Mahrez’s free-kick opened the scoring in the first half before Julian Alvarez added to the tally from the spot after Kai Havertz was penalised for handball.

It was 3-0 before half-time, with Phil Foden getting in on the action as Chelsea had it all to do in the second half.

Foden was involved again for City’s fourth, with Kalidou Koulibaly bringing him down in the box to concede another penalty, which Mahrez converted.

A handful of young introductions, along with the likes of Denis Zakaria and Cesar Azpilicueta, saw Chelsea improve but the damage was done from the first 45 as they fell to defeat.

Gianluca Vialli was remembered before the game with a classy moment of applause and the Chelsea fans showed their respect for the Blues legend throughout the match with chants of his name after his passing earlier in the week.

However, chants soon turned toxic as the supporters were upset with the performance on the pitch and throwback chants of ‘Roman Abramovich’ were soon followed by Thomas Tuchel’s song as Graham Potter watched on helpless on the sidelines.

Man City dominated the first period, with Kepa Arrizabalaga doing well to deny Cole Palmer after 20 minutes before the youngster fired over from the resulting corner.

The Blues felt hard done by as Hakim Ziyech chased onto a long ball from Bashir Humphries and the Moroccan appeared to be tripped, then pulled down, by Sergio Gomez, who was the last man.

However, no free-kick was given and VAR did not overturn the decision, despite there appearing to be contacts on the edge of the box with Gomez the last man back.

And just moments later, Mahrez put the hosts ahead after Lewis Hall conceded a free-kick.

The Algerian stepped up from 25-yards out to put City ahead with a sublime effort, leaving Kepa helpless.

City doubled their lead on the 30th minute, with Kai Havertz penalised after handling the ball from a corner. The German appeared to punch the ball off the head of Aymeric Laporte, and after an on-field review from VAR, the penalty was given.

The World Cup winner Julian Alvarez stepped up from the spot and picked his corner, with Kepa unlucky not to keep it out after getting a hand on the strike, which managed to find its way into the back of the net.

Mahrez tried his luck again from a free-kick before half-time, this time Kepa was able to meet it to push over for a corner as Chelsea were unable to cope with the pressure.

City had their third just seconds later though, with Foden converting after a pull-back from Kyle Walker found his England teammate, who passed into the net from six yards out.

The second half saw the introduction of a handful of youthful Chelsea players, including new signing David Datro Fofana who made his debut.

Mahrez nearly added to the scoreline in the second 45, turning onto his left before firing just wide for the hosts.

Omari Hutchinson provided a bright spark down the right for Chelsea and unleashed a decent left-footed shot from the flank, which was just off target.

Despite the energetic cameos of some youngsters, Potter’s side were unable to mount any sort of a comeback before Koulibaly tripped Foden in the box.

Mahrez converted from 12 yards to get his second of the game and pile the misery on Chelsea and Potter, who lost 4-0.